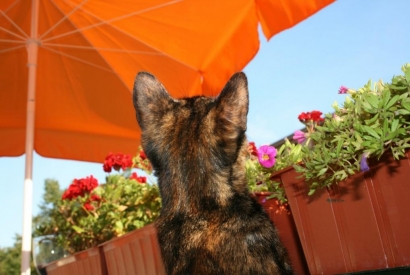 Did you hear about the show "Meet the Kattarshians" ? Launched in early 2017, this Icelandic reality show follows 24/24 the life of kittens (who are all siblings)! Do not worry, the initiative is for the good cause (the program aims to promote the adoption of abandoned cats) and does not fall into the cathodic excesses of the "human" Kardashian family version (although the name has a funny ressemblance). Here, the show is done to the rhythm of the life of the cats, that is to say all gently and with a lot of nap time ... If you have not had time to follow the last episodes, You will find a summary : here are the different activities that occupy the "typical" day of a cat over a period of 24 hours.

We start with the activity that occupies most of your cat's time: sleep ! Adult cats can sleep between 12 and 19 hours per day (an average of 16 hours !). Also, do not ask anymore what your cat does when you are not at home or when he is absent for long hours outside: most of this time is actually spent napping !

Cats can spend up to a third of the time when awake (2 to 3 hours) grooming themselves ! If kitty spends so much time to licking every inch of his coat meticulously, it's first to stay clean and get rid of any parasites. But this ritual also allows him to maintain good health: he thus distributes sebum on his coat and makes it waterproof. In addition, he absorbs vitamin D by licking his skin. Finally, the toilet is a kind of meditation for the cat : it has a particularly soothing effect and contributes to his mental balance.

Explore and mark his territory : 2 hours

Finally a little action ! Your cat spends part of his or her day on the road, usually to ensure that his territory is well maintained. He has indeed elected a "kingdom" of which he is the master. His property titles: the olfactory marks (pheromones or urine) and the scratches that he leaves wherever he has his habits. His daily schedule therefore aims to ensure that these different traces of its presence remain clearly perceptible and to explore any changes that have occurred in its environment.

Observe the world around him : 2 hours

Your cat spends a lot of time watching what is going on around him. Sitting or lying down, his ears up, his eyes wide open and his senses alert, he carefully observes his surroundings. For this activity, he usually chooses a place where he feels safe and where he can see without being seen : balcony, window sill, roof, wall edge ... so many watchtowers that can satisfy His curiosity ! We offer a nice observation post where he can both watch the world around him as much as sleep: The bed.

Domestic cats no longer needs, like its distant ancestors, to spend long hours in search of food. His hunting behaviour, as well as his playing behaviour, remain nevertheless deeply anchored. For your cat, these moments of daily relaxation remain essential !

Eating and doing his business : 1 hour

The "functional" activities of your cat occupy a small part of his time and are distributed throughout the day. In terms of food in particular, the cat is above all a snacker. He will therefore prefer to eat small portions of food on a regular basis, rather than just having two large meals a day.
What are kittens doing in "Meet the Kattarshians" right now ? As you may have understood, there's a good chance they're sleeping ! But instead check yourself through this video :