Cat Fights : how to Protect Your Cat ? 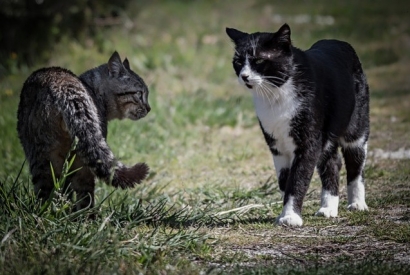 Cats are of a fairly peaceful nature, but they sometimes get their claws out ! If sometimes they play with their fellows, with harmless paws, the real fights are much more violent. They begin with a rather noisy face-to-face: each of the felines trying to impress the other by bristling the hair, while feasting and spitting. And when none of the fighters gives in, this can lead to scratches, even bites. These do not usually lead to serious injuries, but can lead to infections or disease transmission. It is therefore best to prevent these fights from happening.

Why do cats fight ?

As you already know, kitty is a real prince. If he fights, it is most often to defend his kingdom! That is his territory, with limits that are marked very precisely by his pheromones and where he tolerates no intruders (except those few humans who nourish and pet him  ...). Therefore, cat fights are usually territorial battles: they happen when a new cat lands in your neighbourhood, or if you welcome a new feline, in addition to your own, at home.

A second reason, which concerns this time only the male cats, is to fight for the beautiful eyes of one (or several ...) females. Fights between cats will therefore tend to be more frequent during the breeding season, from February to October. For this reason also, female cats just like castrated cats will tend to be less brawling. But this is also due to the temperament and character of each feline : as in humans, some cats are more peaceful when others are more "feisty".

If you are confronted to a cat fight (the real one, with bristles and claws !) You are advised not to try to separate the belligerents yourself. In these moments, the cats are indeed too much obsessed by their enemy to recognise you and you risk especially to get scratched. If you do not want to sit still, you can try to separate them at a distance by making noise or sprinkling water. But that may just push the problem.

Some behaviorist and veterinarians advise to let cats fight, so that the cause of the conflict can be settled. After a few fights, cats usually end up accepting the boundaries of the territory of the other and designating the final winner of the battle. But a conflict that lasts and does not resolve, which can also happen, can be a source of great stress for felines. That’s why perhaps the wisest thing is to prevent these fights ...

Can we avoid cat fights ?

Unless you leave your cat enclosed in a closed room (not the ideal situation ...) there are unfortunately not many solutions to avoid the fight of cats. If these take place under your roof, between two of your cats, one of the possible remedies will be to give each of them a share of "territory" of their own. That is to say to make sure that they each have their litter, their basket, their cat tree ..., in separate places.

In case your cat fights outside, it can be more complicated. If you have a male cat, the most effective solution will be to castrate it. A sterilised cat will have much less tendency to fight. You can also prevent your feline from going out at night, when fights between cats are the most common. Finally, it is strongly advised to have your cat vaccinated against diseases (in particular the IVF, or AIDS of the cat, which is transmitted by the bites). If this does not prevent fights, it will at least protect him from their consequences.