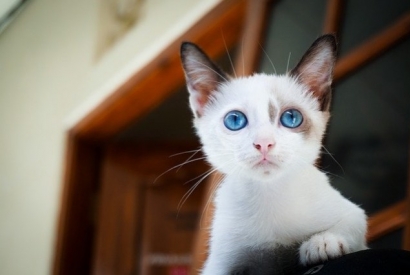 Since we started this blog, it has been our mission to provide you with clear and useful information about your favourite ball(s) of fur. We have set the record straight regarding several preconceived notions, including the belief that cats cannot be trained, that they hate water and that they are incapable of getting along with dogs. But there lots of other generally accepted ideas about cats that can sometimes even cause them harm. We have listed a few of the most common below.

Cats purr when they are happy

This is actually only half true. While purring in cats can indicate a feeling of pleasure or well-being, it can also be a sign that they are distressed or in pain. In this instance, cats purr to release endorphins that help to ease their suffering. You should pay particular attention to your cat if they start to purr excessively, especially if this behaviour is accompanied by other worrying signs such as listlessness, a lack of appetite or aggressive behaviour. This may be an indication that your cat is ill or unhappy.

Some age-old beliefs never die, including the belief that our furry friends have a fondness for milk. In truth of the matter, cats are no different from us humans: some cats love milk, but there are plenty that won’t touch the stuff. But, more importantly, most cats lose the ability to digest milk when they reach adulthood. Once they have been weaned, their body stops producing lactase – the enzyme that makes it possible to break down lactose. So, if your cat does like milk, it’s better to give them a lactose-free product to avoid possible intestinal problems.

Cats always land on their feet

There are hundreds of stories about cats that have fallen from several stories high and have not had a scratch to show for it. The explanation is simple: our feline friends are much better equipped to deal with such falls than we are thanks to their extremely light skeleton and their exceptional inner ear system. The latter allows them to have an acute sense of their position relative to the ground and to quickly adjust their body in order to land on their feet. That being said, cats can indeed injure themselves in a fall. Studies show that – somewhat paradoxically – they are more likely to injure themselves when they fall from a low height. This is due to the fact that they have less time to react and thus to adjust their position for landing.

Pregnant women should not keep a cat

Pregnant women who are not immune to toxoplasmosis often believe that they will not be able to keep their cat during their pregnancy. While cats are one of the main causes of this parasitic infection, which can cause serious health problems for the unborn child, the risk of contamination can be avoided by taking some simple precautions. The Toxoplasma parasite can only survive in a moist environment and is mainly found in cat faeces. Mums-to-be should therefore avoid coming into contact with their cat’s litter box – for example by asking another family member to clean it or by wearing gloves when doing so – and make sure that it is changed regularly (at least once a day).

Cats can see in the dark

Contrary to popular belief, a cat immersed in total darkness will be as "blind" as us humans. In reality, it is at dusk that cats can see much better than us. Their eyes are simply much better "equipped" than ours: they have a higher number of rod cells, the ability to open their pupils wider and an extra layer of reflective cells (the tapetum lucidum) enabling them to better capture even very weak light. So, you could say cats are more creatures of the dawn/dusk than creatures of the night!