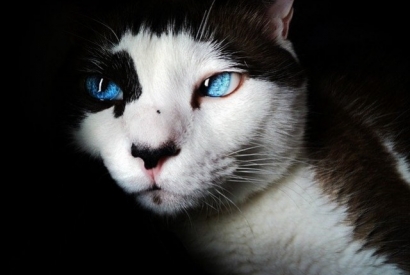 At Meyou, cats are our heroes on a daily basis. Because, for a long time, we have known that our favourite fluffy companions are quite resourceful. To celebrate the talents of our feline friends, we wanted to present the portraits of a handful of them who have left their name in history. Discover the adventures of these extraordinary cats, from ancient times to today.

Born at the end of the 18th century aboard a boat cruising on the Indian Ocean, the cat Trim traveled the world alongside his master, the explorer Matthew Flinders. This British sailor who worshiped his animal even wrote a little book in his honour describing the intelligence of the feline and his skills during his life at sea. They both toured Australia, a continent then unknown, before being taken prisoner by the French on Mauritius. It was there that Trim disappeared mysteriously, leaving his master inconsolable.

Simon, another marine cat, acquired his fame on board the British warship HMS Amethyst. Stowing away aboard the ship in Hong Kong, he was quickly adopted by the whole crew who appreciated his playful personality and his qualities as a rat hunter. Seriously injured during an attack in 1949 on the Yangtze River, Simon quickly recovered and resumed his mission for protecting the ship's supplies. He also helped to improve the morale of the soldiers in difficult times. In recognition of his bravery, he was the first cat to receive the Dickin Medal, which rewards animals who distinguished themselves for their actions in wartime.

On October 18, 1963, the French army sent a rocket from the Saharan desert. On board with Félicette: first cat in the history to conquer space. After an intense training program, she had been selected from several other cats. On D-Day, Félicette took off and returned safely after a flight that lasted more than 10 minutes, including 5 minutes in weightlessness. Throughout the experiment, her cerebral activity was monitored by electrodes. A few days later another rocket flew with another cat on board. But this one crashed with his unfortunate passenger. Luckily for our feline friends, this was the last space experience involving cats …
Towser, a pretty tortoiseshell cat lived until 1987 in Scottish whisky distillery Glenturret. During her very long life (Towser died at the age of 24 !), she gave no respite to the many mice attracted by the grains used to make the amber alcohol. It was these extraordinary capabilities of hunting that earned her a place in the Guinness World Records. After observing her for a few days, Guinness inspectors calculated that with an average of 3 mice per day, Towser had managed to catch 28,899 mice in total during her life! Her successor the cat Turret has now taken up the torch, but the story does not say if he is as much of a good hunter.

Tama, a pretty Calico cat, was in her early days only a stray cat that enjoyed hanging near the Kishi station in Wakayama city in Japan. Her life changed when, for reasons of cost reduction, the railway company decided in 2006 to remove the staff from the station. It was then decided to appoint Tama stationmaster. Accomplishing her mission of welcoming visitors, she helped making the station famous and increase greatly the attendance of this small regional railway line. When she died in 2015, at the age of 16, she was mourned throughout Japan and received many official tributes. It is her former assistant, the cat Nitama, who now replaces her as head of the station of Kishi.