The breeding and mating season in cats 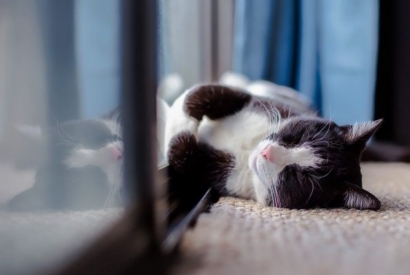 Your cat shows different signs and behaviours that you can’t explain. Your cat seems to be suffering, rolls on the floor, shows a real lack of appetite, strong mewlings and her rear train is often raised. Don’t worry, it must be his heat period. Meyou helps you understand the behavior during this period in your cat. First, we will show you in detail what the heat is in the cat, then the mating season / the mating season in cats. And finally when gestation in your cat is possible.

We all have an idea that rabbits are fast breeders, and they have a reputation for reproducing rapidly. However, the cat does fall in the same category of fast breeders. A queen (female cat) usually starts to breed as soon as the heat cycles begin. The cat undergoes two or three litters per year. Each litter brings one to eight kittens that can add up to a lot of kittens very rapidly. Due to this quick breeding process of cats, the vets recommend spaying the pet cats if they are not in use for the breeding purpose.

Heat or Estrus in cats

The term heat or estrus describe the “period of receptiveness to mating”, but in the veterinary field it is known as “heat cycles”.

Cats usually referred as “polyestrous”. The term polyestrous means that the cats will come in heat regularly during their fertile years. The breeding season may will according to the geographic and environmental factors such as temperature and number of daylights hours.

How long does estrus last?

The heat cycles start as early as the 4th- 5th month of a kitten’s life and will last till she is either bred or spayed. The heat cycles in cats last for many days to two weeks or even longer and repeat every two to three weeks.

The heat cycles usually last for several days with an average length of six days. If the un-spayed cats do not get mated during the heat cycles, then they may go out of the heat for a shorter period. Thus, the heat cycle of a cat can range from one to six weeks.

Signs of estrous in cats

The behavioural changes of cats during the estrus make the heat cycles notable such as:

When does cat get pregnant

The cats can mate during any time of heat cycles. They are the induced ovulate, i.e., the act of breeding triggers the release of eggs from the ovaries. Some cats need 3-4 mating with a period of 24 hours to get the ovulation to happen.

Cats take one to two minutes to mate. Thus they can repeat the process multiple times within a short period. A queen may mate with different tomcats during the heat cycle to make it possible that a litter of kittens may have different fathers.

Once the appearance of ovulation occurs, the female cat will go out of the heat cycle within one to two days.

How long cats are pregnant

The pregnancy in cats usually lasts for 64 to 71 days, with an average of nine weeks, but it is difficult to know precisely how long cats are pregnant. The cat usually does not show any physical signs of pregnancy until a few weeks into her term.