Why do cats do that ? 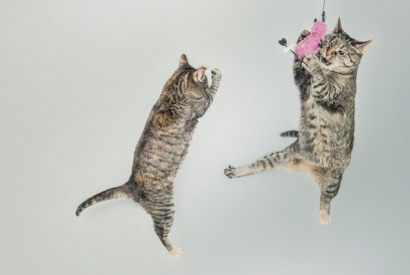 Cats have not ceased to amaze us. The countless videos that circulate on the internet can testify this : our favorite hairballs can be (very) funny, (somewhat) irritating and sometimes completely incomprehensible ! To help you understand their funny fads, we investigated some of the most common behaviours among our feline friends.

What do their adorable habits mean ?

Our cats have some strange behaviours, which are none the less very cute and enjoyable. Here are a few examples.

Why do cats rub our legs ? In his cuddly moments, or when he is very hungry and waiting for his meal, kitty turns you around and rubs his head against your legs or the furniture of the house. A testimony of affection ? By doing this, he actually spreads his smell on you and his environment. It is therefore rather for your cat to mark his territory, and to include you in his olfactory world.

Why do cats knead ? Installed on your knees or on a cushion, kitty kneads the surface under his paws for a long time before going to bed. This behaviour would have several possible explanations : mark (again ...) the place with his smell and make it more comfortable. It would also be a childish reflex, inherited from the time when the kitten fed from his mother, which would endure as an adult.

What do his exasperating fads mean ?

Besides their tender behaviours, cats also have habits that can prove a bit annoying.

Why do cats strengthen their claws everywhere ? Your sofa, your chairs or your tapestry : nothing resists to kitty’s claws. This behaviour is explained first of all by the hunting instinct of your feline : by scratching surfaces, your cat maintains the robustness of its claws. But this habit can also help to relax or to attract your attention ...

Why do cats drop objects ? You may have given up placing knick-knacks on your shelves because kitty always a joy to knock them down. The reasons for his attitude is quite similar to the preceding ones. So, faithful to his hunter instincts, your cat behaves with your objects as it would with prey (a ladybug, a little mouse ... they always enjoy poking them around). Then he may have noticed that his gesture caused some reaction from you and, again, he is just trying to get your attention !

What is the meaning of his bizarre behaviour?

Sometimes, you simply do not understand your cat ... But his odd habits also have their explanation.

Why do cats scrape around their food bowl ? You may have watched kitty consciously scratch the floor of the kitchen around his bowl. Your cat is not crazy : by doing this, he follows an instinct from the past of felines in the wild. Cats used to bury their food in order to mask the odour and protect it from predators. Of course, it is less effective on tiles ... But they also deposit pheromones (thanks to glands located between their pads) which allow them to indicate that this food belongs to them.

Why do cats have moments of madness ? Sometimes, for no apparent reason, Kitty starts jumping in all directions, hiding and then leaping like a devil coming out of his box. There too, no worries to have. Domesticated cats do not always have the opportunity to use all their hunting abilities. By doing this, they spend the over-energy that their sedentary lifestyle no longer allows them to use.

We hope that these few explanations will have helped you to better understand the sometimes mysterious behaviours of your animal.